Home Who is ‘ De La Fontaine ‘ ?
Jean De La Fontaine is a famous French author born in Chateau Thierry in 1621 and died in Paris in 1695. Poet and storyteller, Jean de la Fontaine has especially marked history by his Fables. In 1668, La Fontaine published his first collection of Fables which was a huge success. It brings together 124 beautifully illustrated fables. The poet stages animals to criticize men and denounce the great problems of his time.

His Fables, appreciated by young and old alike, remain current thanks to the simplicity of their language and their pictorial form. Indeed, the narrative strategy adopted by Jean De La Fontaine to use animals to represent the great moral traits of human beings, is still as clever and funny. The form is also innovative for the time: the short story is an essential element, just as is the didactic morality that concludes it.

“There is no point in running, you have to start at the right time”, The hare and the turtle, Jean De La Fontaine.

In early 1905, the illustrator Benjamin Rabier set about the task of illustrating the Fables of La Fontaine. This long-term work will be published in 1906. This remarkable work is still published today (Tallandier editions) and is, without any doubt, the major work of Benjamin Rabier. Each Fable is the subject of a particular layout. Over almost 300 fables, we can admire most styles of that time . Some pages are built “art deco”, as the ‘Mucha’ style , others like “modern arts”, and most in a very particular and personal style , which advertises the current cartoon. 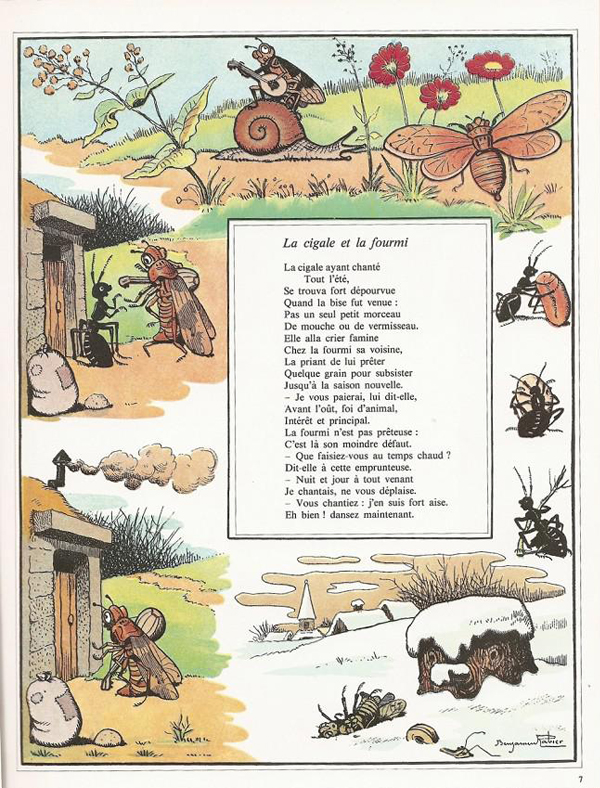 The gay cicada, full of song
All the sunny season long,
Was unprovided and brought low,
When the north wind began to blow; Had not a scrap of worm or fly,
Hunger and want began to cry ;
Never was creature more perplexed.
She called upon her neighbor ant,
And humbly prayed her just to grant
Some grain till August next ;
“I’ll pay, ” she said, “what ye invest,
Both principal and interest,
Honor of insects –and that’s tender. ”
The ant, however, is no lender ;
That is her least defective side ;
“But, hark ye, pray, Miss Borrower, ” she cried,
“What were ye doing in fine weather ”
“ Singing . . .  nay,! look not thus askance,
To every comer day and night together. ”
“ Singing ! I’m glad of that ; why now then dance. ” 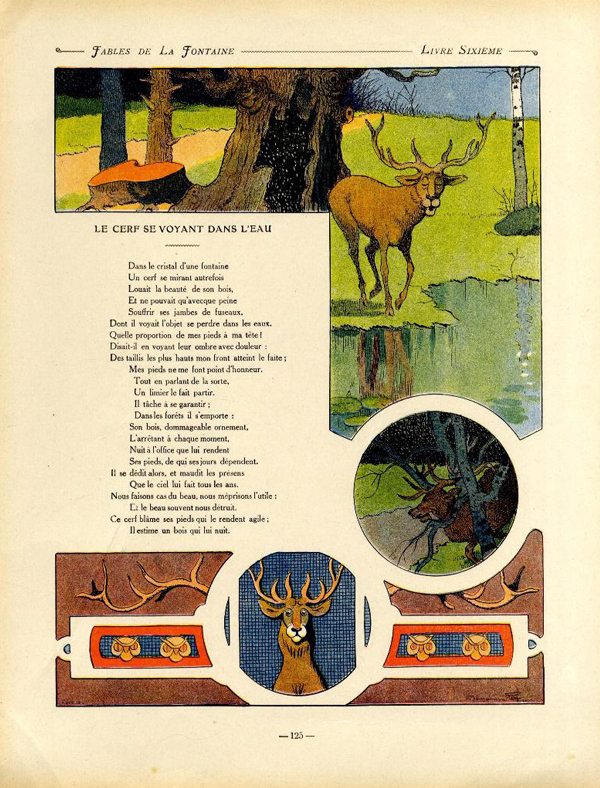 The Stag seeing himself in the water

A stag drew near a crystal brook one morn,
And praised the beauty of his antlered horn ;
Yet gave to nature little thanks,
As he beheld his spindle-shanks
Reflected in the liquid bed.
“ What symmetry, ” he cried, “ of feet and head!
My horns above the copse arise,
But I may well my legs and feet despise.”
Whilst this the stag was heard to say,
A blood-hound made him flee away:
He thought to find some hiding-place,
And to the forests ran apace.
The luckless horns that decked his brow,
At every instant checked him now;
And did all services prevent,
His heels so kindly would have lent.
He now recanted, seeing death so near,
And cursed those horns by Heaven renewed each year.
We prize the beautiful, the good despise,
While in the former oft our ruin lies:
The stag decried his nimble feet that day,
And praised his horns where his destruction lay.

Moral of the fable: “We prize the beautiful, we despise the useful; And the beautiful often destroys us”. This morality highlights a paradox of our humanity, which is still true, especially with the children and teenagers who are often attracted by the appearance. The fable demonstrates that human nature has always been the same for centuries and that even through fables, it does not change.

De La Fontaine Trilingual Montessori School chose “the deer” as the image of the school because the moral of the fable ‘ The Stag seeing himself in the water ‘ could have been a quote from Maria Montessori. In fact, she shared the same values ​​concerning the authenticity and uniqueness of each child, who must be recognized and valued in his strong interior and not in appearance and superficiality.

At De La Fontaine Trilingual Montessori School, we encourage parents and teachers to work hand-in-hand to help the children in their natural development while respecting their individual values. The uniqueness of each child is recognized and valued, there is no competition between them. The value and uniqueness of each child is part of the richness of the group and contributes to build our school’s community.