https://frenchmorning.com/une-francaise-mise-sur-lenseignement-trilingue-par-immersion-en-floride/?fbclid=IwAR0inTWePxjKygqRJQgWFQI5I7Mno3hl6pLmSXuORykQRs7cfKZe7NaAoeo
(Translation in English – Original article in French)
Opened near St Petersburg on the West Coast of Florida, De La Fontaine Trilingual Montessori School is the only one trilingual Montessori school in full immersion in French, English and Spanish in Tampa Bay. A project initiated 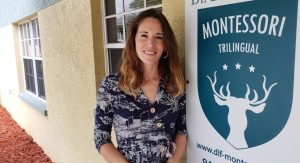 in 2019 by the Frenchwoman Virginie Butin which combines family adventure and professional retraining.
Five years ago, tired of her job as a CBP Officer, a position she had held for over a decade, Virginie Butin wanted to change her career to work in the early childhood industry “I had a revelation when my daughter was born in 2013. At that time, I was working in the field, and I no longer saw myself chasing drug dealers, it was becoming much too dangerous” explains the thirty-five years old woman who was then based in Metz, in France, where she did a 180 degrees turn by devoting herself on an alternative school project. “I chose to move towards Montessori pedagogy to be in line with my aspirations and the way to support my daughter in her natural development,” she explains. However, as there was not yet a Montessori school in my town, I decided to give it a go by opening mine with a collective of parents and childcare professionals. “
The bet succeeded for this young mother who thus founded the first bilingual (French/English) Montessori school in Metz in 2016. Her passion for foreign languages and travels prompted the Frenchwoman to quickly renew the experience, beyond the French borders this time. “With my husband, we had this expatriation project in the back of our minds for a long time because we wanted to offer our daughter a cultural openness”, emphasizes Virginie Butin. And it was in Florida that the couple decided to settle down to open this new school which is based on the famous educational method created in 1907 by the Italian doctor Maria Montessori, aimed at developing autonomy, self-confidence, and creativity of the child.
Named in homage to the French poet famous for his fables and their morals, De La Fontaine Trilingual Montessori School is now a resounding success. Having started less than three years ago with just five children, this trilingual school now accommodates nearly 80 children, aged 1 to 6, supervised by about fifteen international multilingual teachers. Faced with this enthusiasm, Virginie Butin would like to open other schools in the region, particularly in downtown St Petersburg, Tampa and Sarasota. “There is a lot more requests than openings,” insists the Frenchwoman. Anyway, I don’t want to rush because the priority is to offer a high-quality educational program. We are going to go there “step by step”!